Today´s recipe comes from two opposed ideas which at the end fit together perfectly. It doesn´t always happen, but sometimes one feels synchronized.

Not so long ago, looking at my garden and more specifically, at my lemon tree, I kept thinking that one of the next recipes in the blog had to include some lemon. The first idea which came to my mind was obviously sweet and one of my childhood memories: lemon cake with meringue. I still remember when my grandparents used to come to pick me and my sister up on Wednesdays at the school bus stop, to take us to a really traditional cake shop where I would always order the same: lemon cake. The crunchy cookie with the frothy meringue and the sourness of the cream…mmm, even now I can still savour it… Now that I think about it, I have just realized that when I was small I already liked the sourness and the contrast of textures…damn! 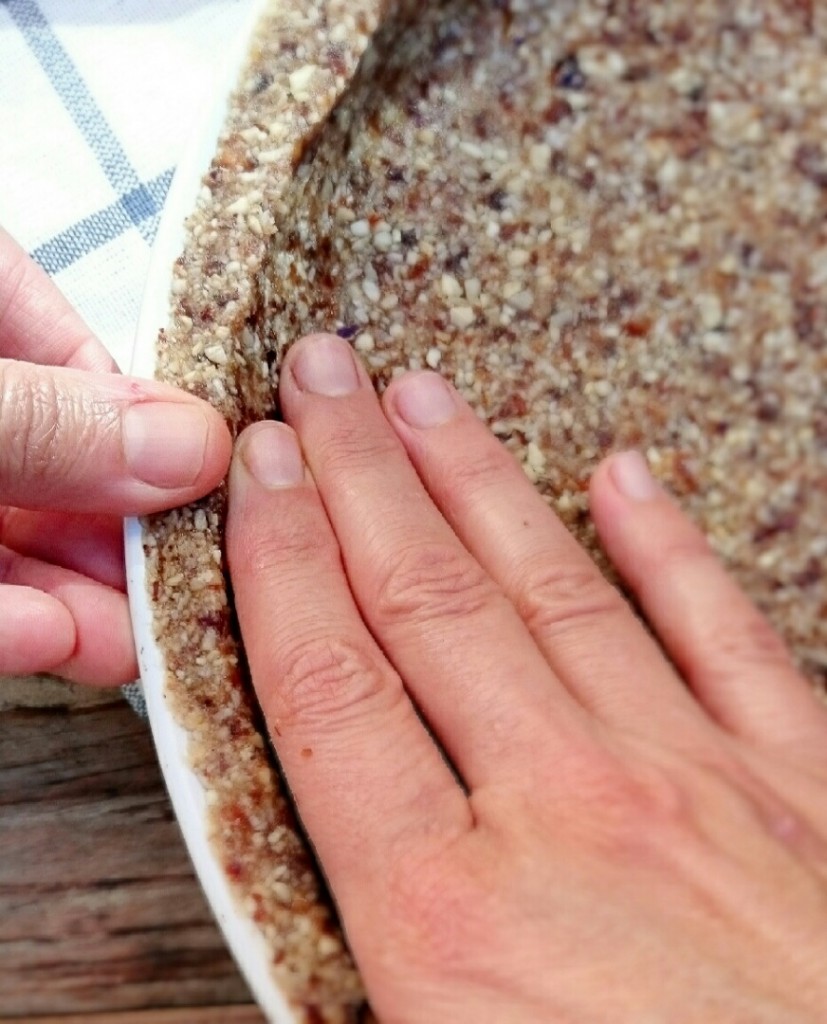 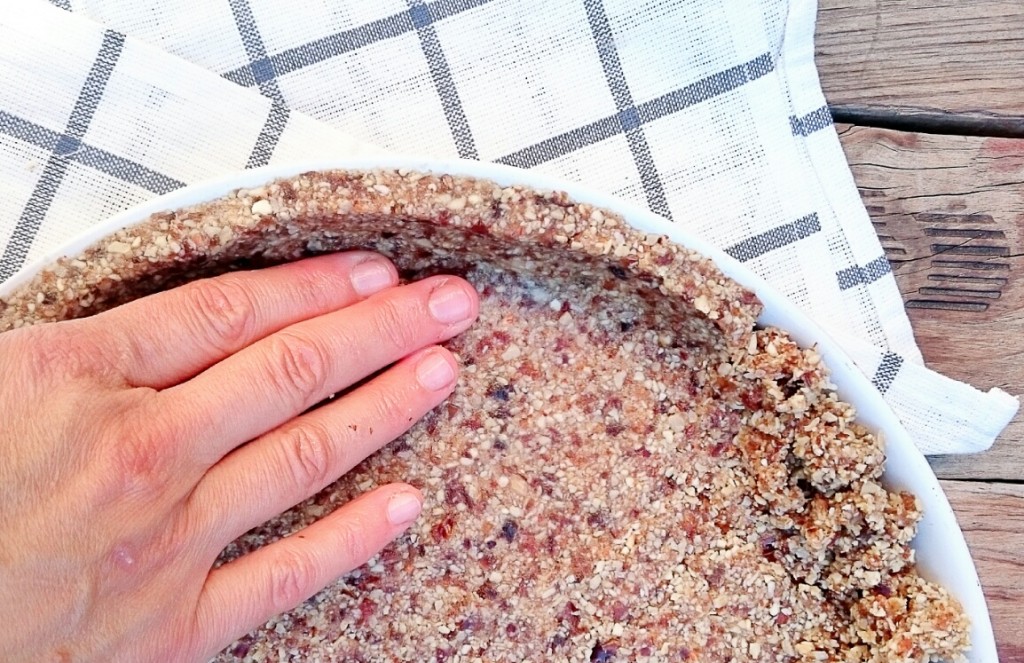 The thing is that on the other side, a little while ago I went to eat to a vegan restaurant and as dessert, there was “raw” lemon pie. The food was delicious, even for my critical palate, but the dessert lacked the flair we would expect from a lemon pie. This pushed me to make a cake healthier than the original one which could taste as real lemon.

I thought of the recipe without meringue, but not so long ago I started to see in my readings an unexpected and awesome way of making meringue…amazing!…I had to try it out!  MERINGUE WITH Aquafava! For the ones who have never heard of it, I can imagine the look of your face right now, hahahah (the same I got when I first knew of it…) but for now the only thing I can say is that it is completely true. 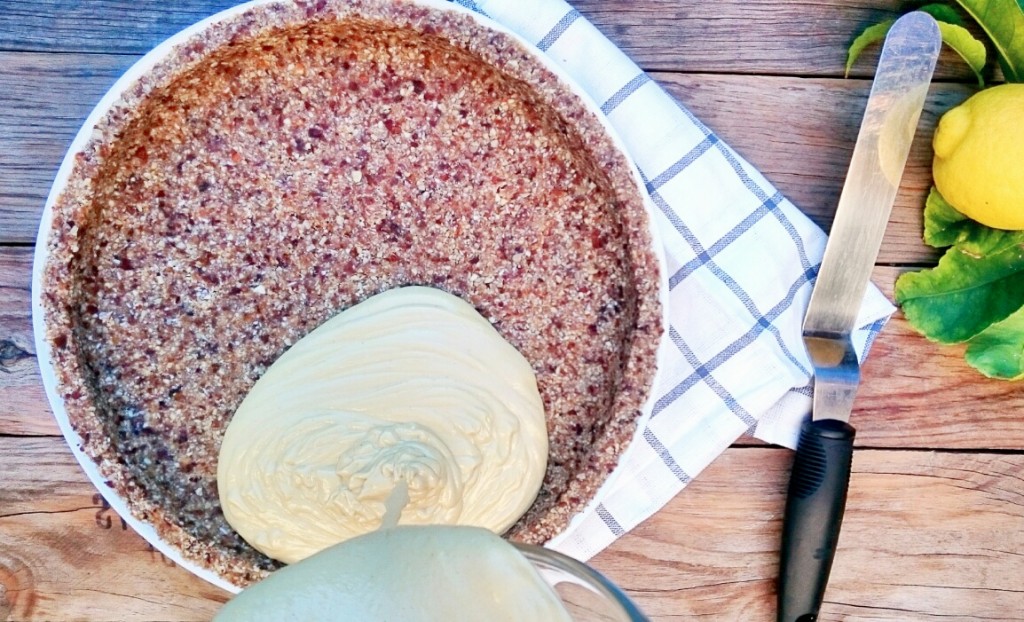 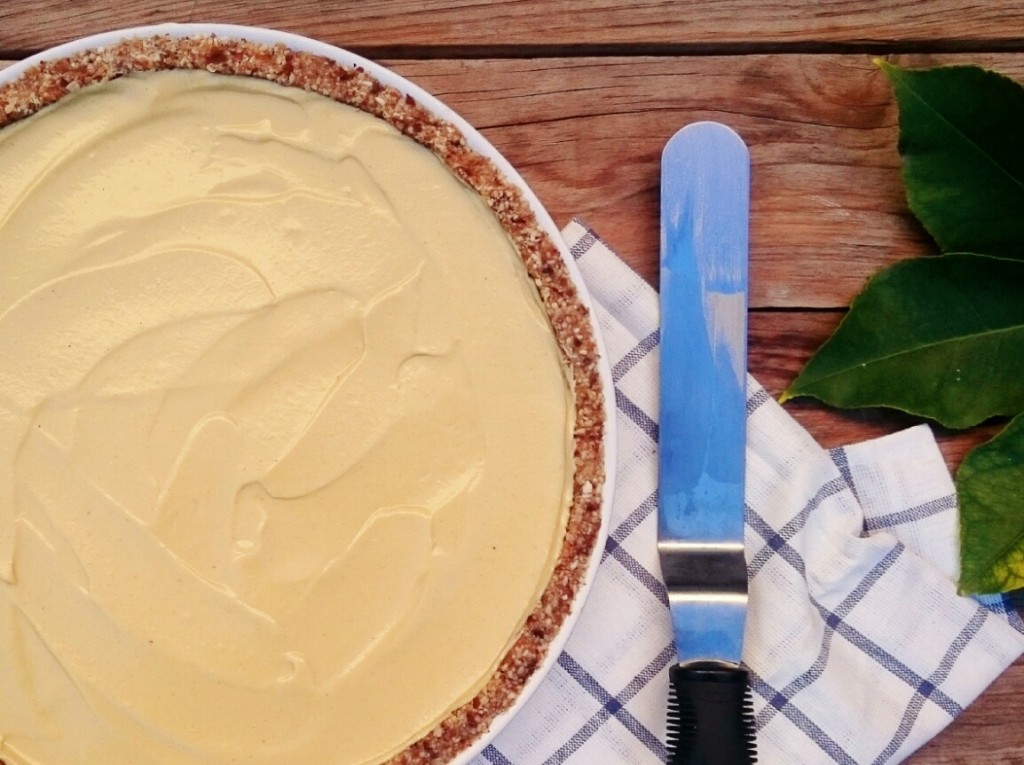 And as the synchronicity was in the air, the best way to try out the meringue was in combination with the lemon pie I had in mind.

Testing the meringue was simply amazing, I had to throw out the first one, that is true, but the second one turned out to be good and besides, it went very well with the cake.  But I have to warn you, because I haven´t run other tests due to a lack of time, that the meringue needs to be made before serving it.  That is to say, if you whip the meringue, put iton the cake and wait for two or three hours, it will have started to release water. The good thing about the lemon pie is that you can prepare it as many days in advance as you want because it can be kept frozen in a perfect condition.

So, you simply need to organize yourself to have ready the water from the chickpeas cooking  in the fridge and whip it at the last moment, or serve the meringue separately so people can help themselves to whatever they want. 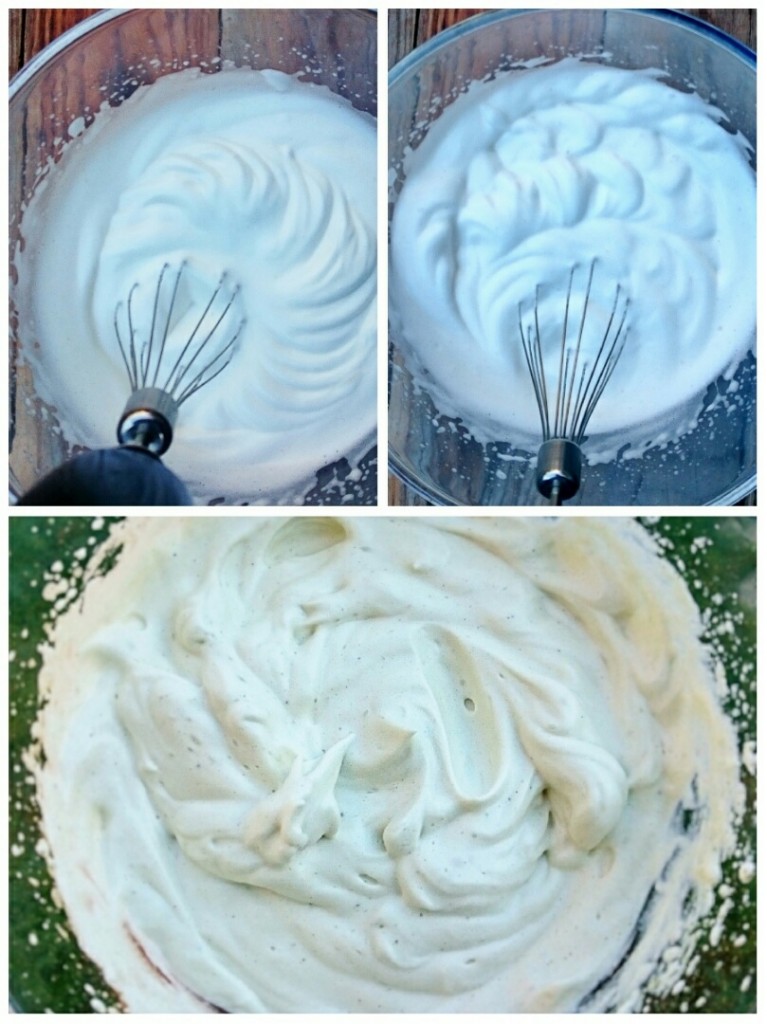 And if you feel lazy about the meringue, THERE IS NO PROBLEM AT ALL! The pie alone is simply delicious! The day after making it, I had to remove all the meringue that had released some water, which is why I said “make it at the very moment you need it”, and it was just so mouth-watering and tasty. I have got the right sourness, balanced but intense, which most of the people like increasing a little the colour with a magical ingredient: the turmeric. And besides that, you can have it at any time! I mean, yes, you can have it for breakfast as well! Yes, you heard it right. It is an energy bomb which includes a lot of nuts and so, it is perfect for breakfast, after practicing sports or having some snack in the afternoon! You won´t believe how my kid was biting into it after coming back from school the day I made it. 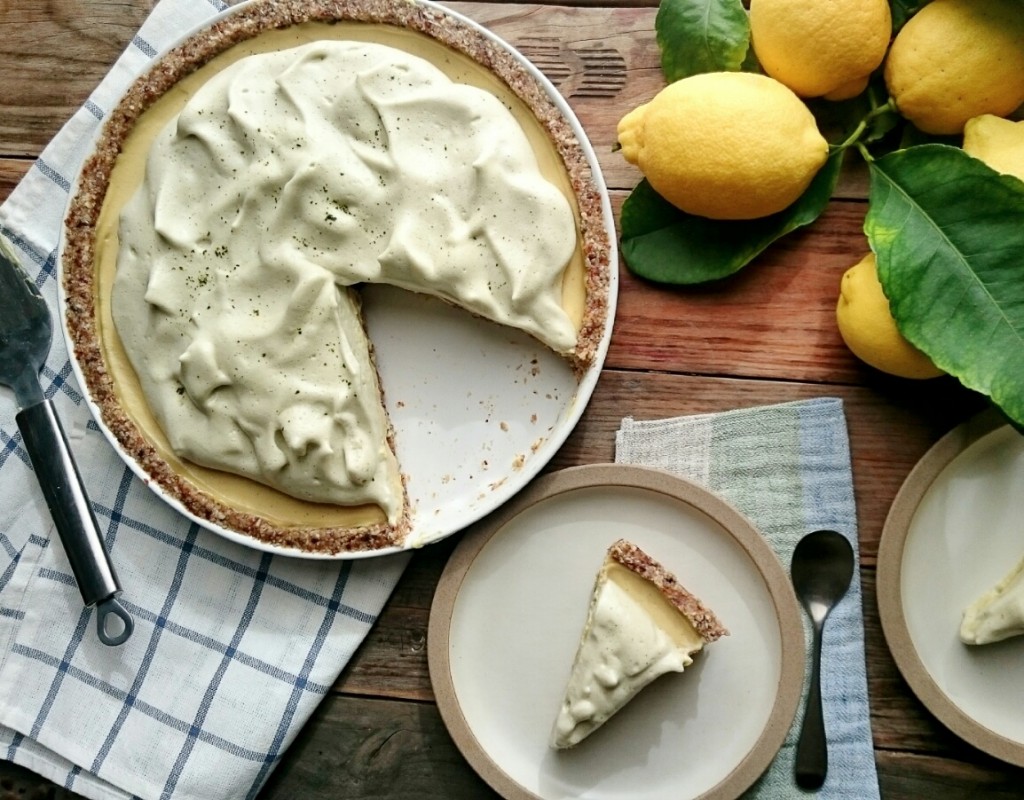 I have to advise you, even if you see the pictures and can be contradictory, that you don´t make the edges of the pie. When I already had this post ready with all the pictures, I made the recipe again for a dinner I had and skiped the edges. It was so much better and less heavy. So make sure to cover your pie shell with greaseproof paper, cover only the base with the mix, cover with the lemon cream and freeze until it´s hard enough to unmold. 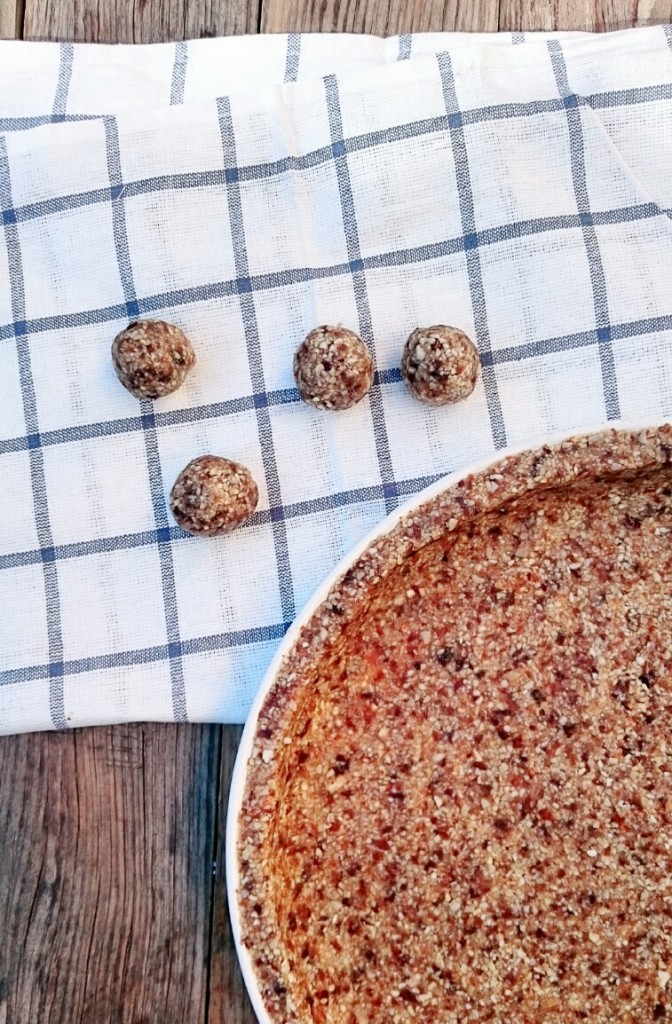 To make you even happier, if that is possible, you should know that the cake base is perfect to make energy balls. Make a double batch, use half for the pie, and the other half turn it into balls to have a stock in your freezer of always ready healthy snack. Yeah, a three-in-one recipe!!! Because you can also make the filling separately and put it in small glasses (with or without the base below) with some funny topping nibs-like with cocoa or granola.

Now there is absolutely no excuse not to practice! If you want to surprise someone, this is definitely your recipe! They won´t be able to believe that the lemon filling doesn´t include any egg, butter or white sugar. And they will be taken aback when you explain them where the meringue comes from…

Let me know how it is for you!

PS: get ready because I have another idea to use this meringue (without the problem of releasing water) and if everything goes well…

Ingredients (for a 21cm mould)

50 gr of strips of dried peach